There's a moment when I live in a foreign country that I start to feel at home. Things don't seem quite so odd to me any more and I are no longer in culture shock most of the time.
It's funny because if I vacation in a place it feels much different than the move. Probably because I'm not trying to figure out how to live but just having fun. Maybe Its because where I have lived is usually not a tourist destination even if the country itself is.
That moment might come when you are heading out to the store, movies, school and your head isn't on constant swivel trying to take everything in. In Indonesia I know it was coming back from a trip and feeling like I was coming home.
We have lived in two countries outside of the U.S. so far, New Zealand and Indonesia, and in each country I have managed to stand out for one reason or another. In New Zealand I looked pretty normal but the minute I opened my mouth out came my flat Midwestern accent. In Indonesia, well let's just say there are no locals with blond hair, green eyes and fair skin and at 5'4" I'm considered tall.
If you live somewhere long enough, all the things that felt different when you first arrived start to feel normal. Things don't stick out to you so much and it is very easy to forget how much you stick out yourself.
When we lived in New Zealand , I remember the first time someone said "I love your accent" and it caught me by surprise. I was so used to hearing the Kiwi accent I forgot I sounded different.

It happened again last weekend. I have lived in Jakarta long enough that this place feels normal. And Jakarta is an international city so there are always a lot of expats around, especially in the little bubble I mostly hang out in.
However, last weekend our family went to Medan, the third largest city but not a lot of expats. T and I went for work and we took Z along to have her experience a bit more of the country.
Z and I were out in the city with my coworker and as we traveled to my speaking engagements I started to notice the obvious head swivel. A lot. I'm sure it still happens in other places but I was starting to feel like I landed from Mars.

Z and I talked about it. It will be odd going back to the U.S. where we look and sound normal. It will be odder still for her since being 3/4 caucasian makes her white enough to still stand out and back in the States she's never considered the "white" girl like she is here.

So here's to being an oddity! And on to more adventure! 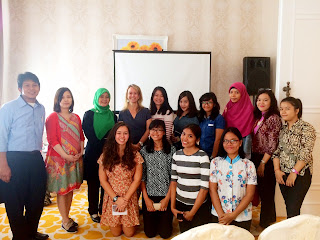 That's me. Sticking out in the middle.