I currently have 314,000 Rupiah in my wallet. Sounds like I'm rich! Frankly, by Indonesian standards you could say I do fall generally into that category. But really I am only carrying about $31.

I am still trying to get used to the local currency and the constant mathematical acrobatics  I am doing in my head.

I have traveled rather extensively so I am reasonably used to the colorful cash that I am carrying around. The pinks, bright greens and blues don't really phase me. It's really all those zeros.

Most of the countries I have traveled to use something that is similar to a dollar type currency, Canada, Australia, New Zealand, The Euro all over Europe and the British Pound.

Maybe it is because T is paid in U.S. dollars, but we are constantly thinking of what the cost is in our native currency and all those zeros make me think harder than I would like to and also attribute to potentially paying more than you think.

An example from one of my neighbors:
Nina was shopping for gifts to send home to friends and family. She had selected a scarf for her mother with one of the beautiful local batik designs. The cost came up 4000000, please note there are never commas. She miscounted the zeros and thought it was about $40 and completely reasonable but by missing that last zero it turns out it was closer to $400!

The other catch. I keep using vague terms like "about" in figuring out the exchange. Currently 100000 IDR are worth $8.18 but most of us find it mentally easier to use the 100000 IDR = approximately $10...only better in our favor.

I wish I could tell you I think it will get easier. It has some but I think given Nina's example I will always question myself during every transaction.

There is also the twist of the predominately cash economy. Many places don't take plastic so you need to have stacks of cash. Add to that the fact that most ATM's only spit out 100000 or 50000 IDR which is a lot of money for some transactions.

Another example:
I love fresh flowers and there are lots of local markets selling them, note we are not talking about the traditional florist you would see in the States but think more like permanent  farmer's markets. I have found that I can get 10 stems of my new favorite flower, tuber rose, for 40000 IDR ($3.27). The thing is you don't want to hand the guy 100000, he probably won't be able to make change. Also if you just negotiated him to that price you really don't want to now ask him to make change.

Next week for an added bonus I am headed to Malaysia for a few days! Their exchange rate is closer to 10 MYR to $3 U.S. I hope all these acrobatics are making my brain stronger! 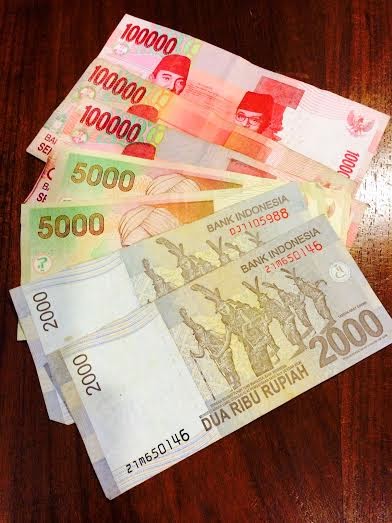