You gotta have faith

Before we left for Jakarta we had many conversations with people telling them where we were headed. With most of our friends back in Ohio the conversation went something like...

With the multiple people we talked to who had been here, mostly in the State Department but not exclusively, it went more like.

How Lucky!
Your going to love it!
But, Oh The TRAFFIC!!

Sometimes, "OH The TRAFFIC!!"  was even the second sentence out of their mouth. And yes it is that bad.

It boils down to this. Developing Country, Big City, No good public transportation and traffic rules are really only suggestions.

Imagine New York City with out the subway system. Now imagine that no one really pays attention to lanes, there are no stop signs, and only the occasional traffic light. You're starting to get it.

Now add in an abundance of people on motor bikes, sometimes whole families, who are even less restrained than the cars by lanes. 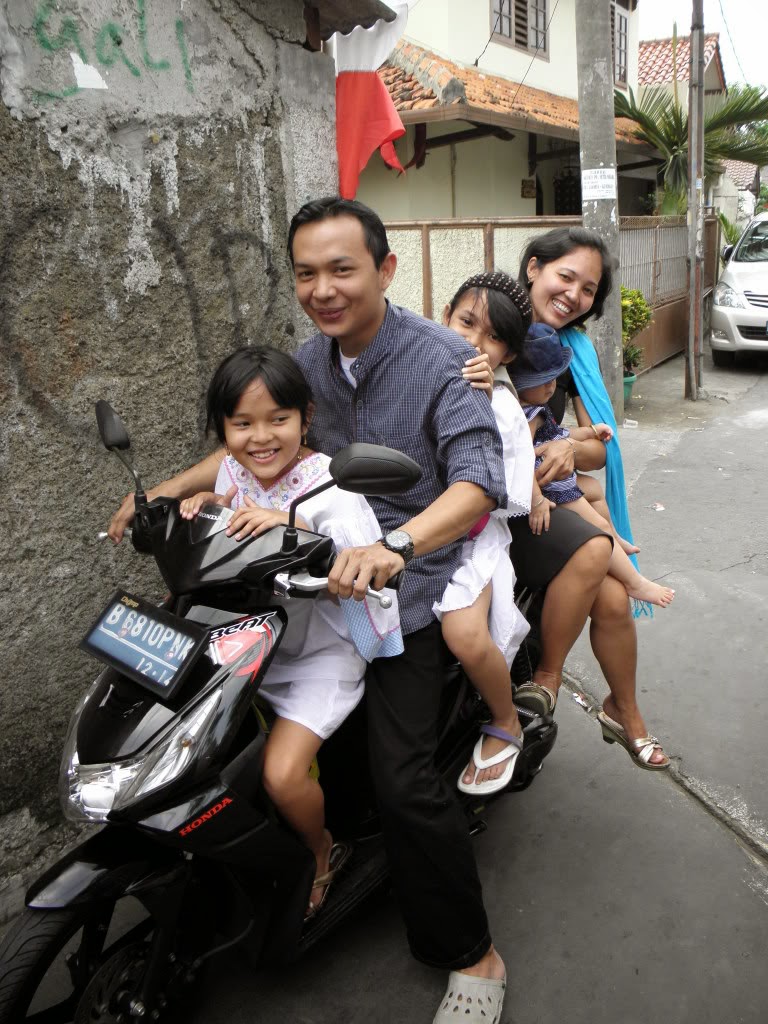 Mix in the fact that like any big city that has just grown up around itself there was no city planning office that gave any thought to street layout.

And for the final pinch of seasoning don't forget the "volunteer" traffic directors who work for tips to try and help the whole process.

I think you are finally starting to get it.

Because of this, we don't drive. And if you know me, you know this is killing me.

I sit in the back of the car while my wonderful driver Pak H. (Pak is the honorific for Mr.)
escorts me around town. He is generally pretty safe and conscientious driver. However even with him I have my moments where I just don't watch and hope for the best.

On weekends and evenings we have been known to take taxi's. We stick to the Bluebirds, known to be the best option, but I think because they are one a mission to earn more fares they are a little more daring.

Because here is the amazing part.  Due to the lack of any real lanes and a general dearth of traffic flow control, motor vehicles push their way into the space they want to occupy. The amazing part is that generally other cars let them do this.

Want to make a right hand turn through the stream of oncoming traffic? Simply start going.
Want to change "lanes"? Just start moving over.
U Turn? Sure!

I won't pretend that I am not occasionally terrified by this. I am never quite confident that the motor bikes, who weave freely through traffic, will really stop. But cars always do. Now I am sure that some of this has to do with the fact that everything moves at a crawl but other than the incessant beeping horns I have come to believe that anyone who drives in this city is a Zen master despite the fact that they are Muslim.

The amazing part is that there are very few accidents of merit. Sure there are minor fender benders but not the kind where people get hurt. Which is good because I am positive an ambulance would never get through the traffic.

What I know for sure is that most Americans, especially some members of my family, would lose their minds driving in this.

So while I sit in the back, sometimes closing my eyes or letting out a small gasp. I am learning you gotta have faith.  And somehow it happens. 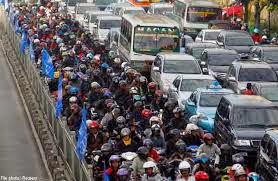 Read more from T's point of view at: SecretAsianMan3.blogspot.com